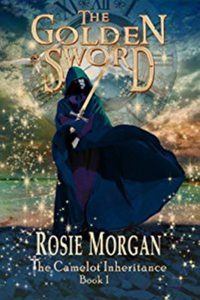 On 7th December 2016, teen fiction author Rosie Morgan served us a mix of readings, tips and writerly stimulation, in the form of lighted shells and a top hat in a box.

Rosie Morgan is a successful author of fantasy for older children and young teens. Set in Cornwall and with an Arthurian theme, her books might be considered to appeal only to those who know Cornwall – which is what one Amazon reviewer thought – but not so. They sell best in the US, where Arthur goes down a treat.

So what’s the recipe for a successful teen or pre-teen read? Rosie says it’s about fast pace. And short sentences. Good quality illustration is also a winner – Rosie Morgan is blessed with a double measure of talent, and her pen and ink illustrations of extremely high quality grace the books. And, of course, appealing story and theme. Rosie also advises:  “mix action (short, punchy sentences), dialogue and description in writing for older children”. She counsels firm restraint when it comes to ‘flowery’ writing and “the careful employment of adjectives and adverbs”. Rosie explains that “children need to be ‘hooked’ from the off, so an intriguing opening is pretty important. Further in, the characters have to be well drawn and believable as well as having a likeable protagonist. In my books”, she adds, “although they are ‘fantasy’ stories, the setting is integral to the plot: the protection of Cornwall from those who would wish it ill”.

Rosie did read some of her own captivating work, but was also very generous with her time and attention, listening to us talking about and reading from our own adolescent favourites. Mentions of the Wishing Chair (“oh yes!”), Roald Dahl (“ah, marvellous!”) and ponies (“sigh”) struck a note in the hearts of listeners, but we also learnt about the German taste for moralistic, multi-volume family sagas, and shared reminiscences of early visits to the adult section of the Library, back in the day before teen fiction was invented, and choices which were variously inspirational, ill-advised, or plain alarming.

After the interval, we all settled down to write the opening of a ten or older children’s novel, featuring either a Victorian top hat or an illuminated shell. Below you can see two of the results, both written in ten minutes flat!

When I stepped out of the Machine, my first thought was to reach for my hat. Would it have  survived the journey, and everything that followed?

At first I was reassured. Henry Heath, the maker, would have been happy with its condition. Glossy, upright, with its shapely brim, neither soiled nor dented.

It was only when I looked more closely that I saw the problem. The machine was already settling to rest, the ticks slowing as the steam condensed and the pistons ceased. But the hat? A faint sheen hovered around it. And when I reached out, thinking to reclaim it from behind the glass screen, I felt my hand repelled as if by the force of a magnet.

“What’s done cannot be undone” said the Professor. “I warned you of that before we began”.

Dad always said I was too cheeky. He told me one day my mouth would get me in trouble.

Sure, I thought, but I’m so much smarter than everyone else. Let’s face it; some people need to be put in their place.

At least that was how I thought until I got put in mine.

I remember the party for Sally clearly. It was so boring, and then on top of that her parents rolled out this useless magician.

“Now then boys and girls, can you guess what’s up my sleeves?” he said in his patronising voice.

Marvellous Marvin he called himself.

“What a load of rubbish,” I called over and over.

His card tricks were dull. He pulled handkerchiefs from his sleeves, and fake flowers out of somewhere.

“Bet you had them stuffed up your bum,” I shouted.

I was really enjoying all the other kids’ laughter and applause. Soon I had them chanting, “Fake, fake, fake, fake, fake…” I followed this with a cry my Dad used when watching football, “You’re useless and you know it.”

Marvin looked close to tears, and I loved it. I was the star. I was the one on the stage. Of course, now I realise I mistook upset for anger.

He invited me up with him. I hopped and skipped right up there, bowing, and soaking up the applause from my fans.

He removed his top hat, and got me to look inside — nothing. He got me to check that it was a real hat — I did, and it was.

He started waving his fake-looking wand around, and then tapped me on the head with it.

So now here I am. I remember the tap on the head, the top hat coming toward me, but not a lot straight after that. He pulls me out every now and again. He holds me up to the mirror, where I see my long ears, my big feet, and my twitching nose.

He likes to whisper to me, “Now Flopsy, now you’re the star of the show.”

A lovely afternoon at the Longboat, and many thanks again to Rosie.