The members turned up in plentiful numbers, and so did the cards, including a large collection of various artworks, tasteful pastorals, and holidayscapes in preternatural colour. After preliminary exercises on observing in role and giving rhythm to prose, the members were duly set to work: first with their voices, then with post-it notes, and finally with proper sheets of paper. The idea was to give voice to the imagined writers of the cards – or, if the cards were already written and the voice provided, to transform the sender into a fully-voiced character.

Here are some of those voices. Let the postcards speak! 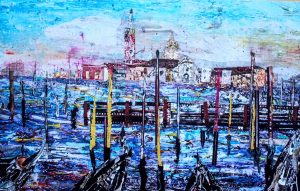 First up, here’s a return to Venice, via Wirksworth:

I’m visiting Wirksworth in Derbyshire and came across this strange little gallery specialising in creating works of art from waste and discarded materials. The picture overleaf reminds me of the time when we visited Venice, went for a ride on a gondola – the boatman was gorgeous – and had a look at the Doggy’s – I thing that’s how it’s pronounce – palace. I seem to recall that my dear sister Emma broke her sandals and fell into the canal. Happy days! 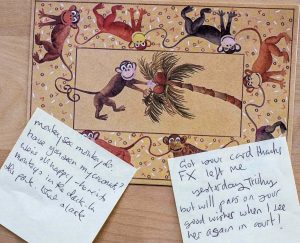 Secondly, too much monkey business…

I guess it was naïve to think a holiday in the sun would make a difference. It started well enough, arriving to a glittering sea with the beach fringed by coconut palms.

I’ll always remember the gentle swish of the palm fronds when we sat on a grass mat on the beach. I was hoping it might be a return to Paradise, a time of getting along and forgetting.

The monkeys appeared when we were having breakfast at the bar. She thought they were cute and threw some crusts. But when they grabbed the offerings in their nimble paws, then stopped and bared their sharp teeth…. That’s when the rows started again.

Thirdly, Edouard – writing from the lofty heights of the Xaverian Brothers School – is brought back to life after 100 years:

I am homesick. Life here at the Brothers’ school is dire. We are woken at seven by the Angelus bell, and the day is punctuated by further bells to summon the boys to class, or lunch, or rugby, or whatever. Why I took the job as a French teacher here I really can’t imagine.

I suppose it was because Jeanne suggested it, and I wanted to please her. The house in Croydon isn’t expensive, but it does cost us a little. In all honesty, I’d be happier working as a labourer and sleeping beside her than I am here, surrounded by over-sexed boys and supposedly celibate monks. Even the food is dreadful. Brother Antoninus’s spotted dick isn’t a patch on Jeanne’s dumplings, or her chicken thighs with cream. 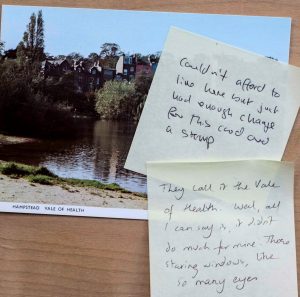 And Outraged of Hampstead:

Vale of Health, as they say. Maybe it was, once upon a time, but now I wouldn’t feel safe walking around Hampstead Heath on my own. Not even by daylight. And what about the people who live here? The prices were outrageous thirty years ago – which must be about the last time I looked into an estate agent’s window in Hampstead High Street.

There’s a couple of boys sitting fishing by the water, and I was just thinking, it’s nice they still enjoy outdoor pursuits instead of sitting with their computers or smart tabs or whatever they’re called. Then one of the boys looked up and saw me, and he nudged his friend and whispered something, and they began to laugh, in a way I didn’t like. At all. Honestly, young people today, they’ve got no manners.

And, going back to the people who live here, they’re just showing off how much money they have.

Writers’ Café. It’s not just about the cake