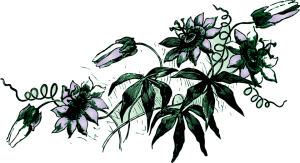 What if Christianity had never taken root in Britain? How different our world would be – different beliefs, different allegiances… Queen’s Daughter, the first volume of the Crowshensa Series, is a retelling of Arthurian myth that will re-imagine the entire history of the British Isles

The boy stands stock-still, the damp from the long grass seeping into his boots as he watches the band of travellers emerge from the clouds.

Angels, the christ-priest might call them, as they descend as if from heaven; but Golvan knows better.

The fog begins to clear and now he can see his heavy-bellied ewes scattered across the moor. There is the occasional bleat, and the sound of them ripping the sparse grass.

The beasts seem content so he makes his way down the hill, eager to get a better look at the strangers. Crouching behind the broken back of an ancient granite menhir, he waits.

…close enough to smell the sweat of horses and men, to hear the scuff of hoof against rock, the creak of their saddles and the jingle of harnesses.

The company is small. The men have leather helms and their mail is revealed in glimpses every time the wind twitches their cloaks. Unlike the men, the women are not young. Strands of grey struggle to escape hoods tugged tight against a sudden squall that rips away the last strands of the fog. One man rides a little apart. He wears no armour; his head is uncovered and his black hair shaved back from his brow, in the way of the drouiz.

The lead rider carries a banner. The pennant is furled but Golvan knows it from hearth-stories he has heard all his life: scarlet and gold, the colours of Kyndern Gwrlais, the Flame of the West.

Golvan’s heart thunders against his ribs as tales of childhood become flesh. He almost stands up to call a greeting, but thinks better of it. What if he’s mistaken? The war has raged for so long; he has no idea which side now has the upper hand.

Nor does he recognise the men and women of this company.

For this reason, he chooses not to risk his life; not for a story, not for a dream, nor for the colours of a half-remembered banner.

Muirghein lowers her head; driving rain stings her brow; she almost wishes the fog would return.

This isn’t how it should be. In her dreams, her homecoming is marked by the banner of the sky unfurling above and the sun striking tinder sparks from the surrounding sea.

Her dreams are usually to be trusted, but not this time.

The men had thought it foolish to set out before the fog cleared but she insisted and has been proved right. Even so, the men remain restless, muttering amongst themselves that the storm now brewing is proof the gods are angry, that they are making a stand.

Angry about what? Making a stand against what?

Perhaps against their return to Dyn Tagel? Or the fragile peace she has brokered with the Saexe? Or could the gods be expressing disgust at the gift the Saexe are bringing her, the failing body of their broken king?

Sky-fire lances the clouds; thunder causes her horse to shy and she almost falls.

Eseld spurs her mount alongside. ‘If I didn’t know better,’ she mutters. ‘I’d say the men are right, that the gods are truly in a rage and have brought us to time’s end…’

‘Truly? You would say that?’ Muirghein reins in and swivels in her saddle. ‘Oh but Eseld, you do know better. It is only a storm; it will pass…’

In all the years they have been together, she and Eseld have more than once born witness to the impossible. Perhaps Eseld and the men are right and this is another such occasion and that, for reasons known only to themselves, the gods are indeed angry, and lashing out.

Muirghein cannot claim to know the hearts of the gods, but she knows her own heart – and it is true.

Straightening awkwardly in her saddle, she presses her fist into the small of her back. The jiggling of her mount has made her bones ache. She is too old for this. She is strong and has led a vigorous life, has wielded sword and axe, set fire to crops and thatch, but such things take their toll. Most women of her age would have a seat by the fire by now, and a litter of grandchildren swarming across their laps.

Yet for all its trials, she would not change her life. She has been called upon to do hard things, but she consoles herself that she has done them in pursuit of what is good, of what is right.

The story is almost ended. Muirghein does not think it will be an ending for her, but it for Eseld it will, and for Arzhur.

She bites her lip and grips the reins more tightly. Leaning forward she peers between her horse’s flattened ears, struggling to identify some feature that will place them in this landscape – a tree, a boulder, something the years have not worn away and changed.

Perhaps she should summon the boy she’d glimpsed huddled behind the collapsed standing stone?

No, better not risk it for she recognises neither boy nor stone, neither her memories nor her dreams have shown them to her.

Ros Beith. If their course is fair, the sacred circle should be to the west. She urges her horse forward to join Owain who rides straight-backed, doggedly clinging to the furled standard. Ahead of them, clouds the colour of iron bank like a defending army.

They pause, huddling beneath their waxed capes; the rain spattering their hoods is deafening.

Then a cry goes up and Owain points to where two granite gateposts, each twice the height of a man, loom out of the murk. Muirghein almost sobs with relief as she recognises the entrance to the outer lodge; beyond this is the landbridge that will lead them home.

Once, long ago, her father’s banner had flown from the palisade walls of Dyn Tagel, his emblem a crimson blaze on a gold ground.

Flame of the West.

She pulls her cloak more tightly about her, then she and Owain lead the company up the final rise to the outer lodge.

Their horses’ hooves clatter and skid on the rock as they cross the landbridge, a narrow neck of rock tethering the headland to the shore. More than once they come close to losing their footing. Boulders and stones scatter down the cliff-face and the horses whinny and roll their eyes. Eseld keeps her head bent, using her hood to shield her eyes from the dizzying drop to the churning sea.

A final climb brings them to the shelter of the palisade wall. The gates creak open and they enter. Wet and cold to the bone, they cross the enclosure and make their way to the women’s hall.

Cethin is steward here now. He bustles out to greet them, meeting Muirghein’s eyes briefly before turning away. He has questions, she sees them gather in his eyes, but he knows better than to voice them. He calls to the boys to take the horses and beckons the serving girls to fetch dry clothes and food and hot stones for the chilled travellers to cradle against their bellies.

It has been a hard journey. Muirghein is exhausted. She crouches with her face close to the hearth fire. The dish of barley broth scarcely warms her. When Bridie, Cethin’s wife, offers her a newly heated stone wrapped in sheepskin, she thanks her for her kindness and retires at last to her bed.

The bed her mother and father once shared.

Eseld slips in beside her and they snuggle beneath the blankets and furs, just as they had as children, in Zethar’s hut, long, long ago.

Despite her exhaustion and the comfort of having Eseld at her side, Muirghein cannot settle. The gale tears at the thatch and the granite quakes as if, at any moment, the headland might be ripped from its mooring and tumbled out to sea.

Nor does morning bring any respite, nor the day that follows, nor the one after that.

They do what they can, find comfort where they may. Bridie toasts honey cakes on the hearth-stone and Muirghein raids her store of dampened spices to mull the ale. Eseld finds a lyre in an old bed-chest and perching on a stool, flexes her stiffened knuckles and begins to play. She is clumsy at first but slowly her fingers recall the patterns and the sweet notes trill, curling like wood smoke to the rafters.

The storm grumbles on for a se’nnight and on the eighth morning, Muirghein wakes to an uncanny silence.  At first she is afraid, thinking her hearing has failed her; but then comes the rattle of shutters being opened and sudden sunlight spills across the floor, like honey from a tumbled jar.

She pushes back the bed-furs.

Eseld is already up and stirring the embers of the fire, blowing on them till they glow, then adding scraps of tinder until they flare.

Muirghein looks about her. Try as she might, it is impossible to hide from her past in this place. Every nook is crammed with memory: by this fire she awaited her father’s return from battle, on that shelf she’d kept the little bone stag he had carved for her; in that bed –

No, no more. A lifetime has passed since that night. She was still a child and Cethin a young man newly down from the moors. Look at him now, fresh in from the cold, his face lined, his hair and beard brindled to grey.

A sudden tenderness sends goose bumps dancing along her arms and she turns away from him.

She cannot change the past. As she waits for the future to unfold, she takes comfort in the little pleasures.

In Bridie’s oatcakes, and sweet braggot, and Cethin’s smile.

But at night, when the light goes out of the world, her fears crawl from the shadows, like bugs from a rotten log.

Perhaps, when the battles are all fought and the earth is dark with the blood of fallen warriors, when new-born babes can once again sleep easy in their cribs, they will say this storm was sent by Noden to mark the end of the dark times, and the coming of the light.

She has lived for that future, has striven to shape her world for good. She has studied the stars and unravelled the skein of her dreams, yet cannot know whether or not she has succeeded.

This is why she has returned here, to the place where it all began. To this rugged fastness jutting into a perilous sea. To this land of memory, Dyn Tagel.