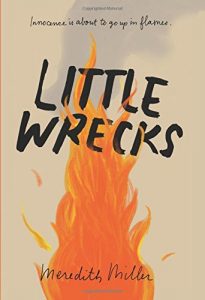 Author Meredith Miller visited Writers’ Café on August 16th, to give us insider tips on the road to publication, how to get noticed and – well – great launches.  And the only example of ‘Little Wrecks’ was the book of the same title.

Available as a hardback online and in the US, but not yet in UK shops, the book presents potential customers with a stylish and well-considered cover which has a deceptively simple and casual feel. It’s the kind of book that’s asking to be picked up, and the readings had us spellbound: the freshness of the present tense narration; the beautifully formed sentences; the capture of youth in all its frankness and hope.

Meredith describes her viewpoint as the ‘close third person’ and the readings brought us near enough to feel the warmth of the character’s breath. Meredith talked about the dramatic potential offered by a group of three protagonists. To give them reality and weight, she writes her way into her characters: gives them back stories and conversations that will have no place in the finished work.  A morning writer, she rises early to catch the insights of her ‘dreaming brain’. And if you wanted to present her with a gift that would go on giving, you could do worse than an internet-disabled laptop.

Apart from reminding us about the dangers of on-line distraction, Meredith had clear and useful advice on editing. ‘You have to lock the editor out of the room when you’re being creative’, she said, ‘…and lock the creative out of the room when you’re editing”.  Keen to follow advice and ‘kill your darlings’, but queasy about massacre? Editing can be more constructive than that. Excised matter need only be put aside for another occasion. The darlings have merely been laid aside to a better place, in sure and certain hope of the resurrection to come.

Meredith also gave useful advice and insights regarding the publishing industry, advising against making payments to literary agents.  Publishing professionals have protocols which they expect authors to follow, and compliance is taken as a sign of a professional and realistic approach on the writer’s part. But once that impression is established, a writer of confidence and skill can afford to be – if not bloody – at least bold and resolute. ‘Stay in control of the process’, Meredith advises. ‘Put your book where you’re happy putting your book’.  And how to best use your ‘getting published’ slush fund, if fate has unaccountably failed to come up with a private income?  Take time off from your day job. Pay an editor. Pay a cover designer. If there’s anything left, and the cat hasn’t moved out in disgust at the meagre rations, pay a PR firm. But don’t, under any circumstances, pay that agent. Their job will be to make money from your sales.

Marketing is also an issue. We had all noted the cover of Little Wrecks with interest and approval. Another influential factor is the imprint, and how a book is placed in terms of marketing. Little Wrecks had originally been categorised as ‘Young Adult’, (a genre whose readers are not the teenagers who tend to be the main characters, but grown women in their twenties and thirties). But this is very much a grown-up book, and does not fit into the ‘issue-based’ category that currently dominates YA. As such, it is only fitting that the book is now being sold under the general Harper imprint. Meredith also assured us that the print book as a form is alive and well, and has many young and devoted fans.

When the three copies of Little Wrecks that Meredith had brought with her were snapped up by members of the group, while I was waiting at the bar, it was a disappointment but not a surprise. Meredith, you could have sold at least four. I won’t divulge what proportion of the audience wanted to buy the book, but it must be something of a Writers’ Café record.  And Harper Collins – what does Penzance want? Little Wrecks in paperback, down at the bookshop. When do we want it? Soon.