I live in Cornwall and have done since 2011, but I can’t remember the last time I had a cream tea.

That said, I do have a sweet tooth, which means I’m a sucker for a cream tea; I also have some very romantic notions about them. On holiday in Cornwall with some friends a decade or so ago, I spurned all ‘in town’ tea shops, in fact anywhere that felt overly commercial. At my insistence, we drove around the countryside looking for a tea room with garden tables, preferably with red and white gingham tablecloths.

Luckily, I had a couple of supporters in our party and although it took a while, we did find our garden.

A couple of weeks ago I had an exchange along these lines on Facebook and the interest encouraged me to consider creating a cream tea blog. My first opportunity arose when I visited Warwick for the folk festival.

The Warwick Folk Festival site is 10 or 15 minutes’ walk from the town centre and David and I decided to go into town on the Saturday morning. We crossed the river, cut through the castle grounds beneath some wonderful overarching trees, then up a steep flight of stone steps, emerging close to the Thomas Oken Tea Rooms.

As you can see, it’s a lovely 16th century building and the weather was good enough to sit outside – which was great as the town was bustling and behind where I stood to take that photo, the Witchmen Morris and a troupe of belly dancers were preparing for their performances.

My husband, David (who you can see seated in the foreground) spotted the cream tea menu first and I have to confess I quibbled a bit. It was just after 11.00 in the morning, and surely a little early for a cream tea?

‘But you said you wanted to write a blog,’ David said.

‘Well yes, but maybe it would be better to do it later in the day, on our way back to the festival…’

‘It’ll probably be too busy by then.’

I quibbled a little more, but David persisted. We later had a conversation about his autism and the difficulty he has when it comes judging the point at which encouragement crosses the line and becomes harassment. However, on this occasion he judged it perfectly and it was the right decision – but more of that on another day and another website. Now for the cream tea:

One test of a tea room is how they cater for those lacking a sweet tooth. The Cookbook in St. Just, for example, offers a Cheese Tea with an apple & walnut scone, home-made red onion jam and 3 Cornish cheeses – a review of this to come, but for now back to Warwick. 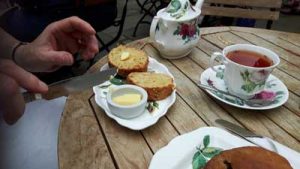 As you can see, it’s presented very simply but David assures me that it is deceptively simple and that it was a delight.

In David’s words, the scone was:

‘cheesy without being overpowering, soft without being sodden and with a crisp, but a not hard, crust’ he also believed there was a ‘tiny, tiny hint of mustard.’

Given how fussy David is about the cheese-content of a good scone, quite an accolade.

Now if you look at the above photo, you will see something huge lurking a little Kilroy-ish, in the foreground. Well that Kilroy was my massive fruit scone. 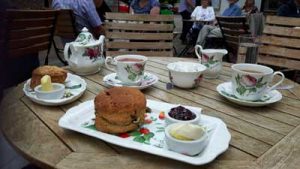 It was a beast, it was also warm and fruity and spicy and I had great fun identifying those flavours. Orange zest? Cinnamon? Definitely, but also something else I couldn’t quite put my finger on. Afterwards, I chatted to the lady in the shop and she confirmed the cinnamon, said the ‘orange zest’ flavour was from the candied peel (although I didn’t encounter any candied peel) and the mystery flavour? Vanilla, but clearly applied with a light hand, as vanilla can be overwhelming.

The strawberry preserve was pleasant, if not exciting, and the Jersey clotted cream, although not up to a nice dollop of Cornish clotted (well, I would say that, wouldn’t I?!), was good and rich and just the right amount. I have a bit of a bee in my bonnet about not being given enough cream (same goes for not enough butter with a toasted teacake 😊)

I wasn’t able to finish my scone…well it was huge and it was only 11.00 am, but all in all a gold star for both cream and cheese versions.

A Little Dish of Tea to go with?

Not for me, I’m afraid. I loathe tea. I made a stand, aged 10, when I got a mouthful of unstrained tealeaves. ‘No,’ I said. ‘I’m not drinking it and I’m never drinking tea again.’ Nor did I, instead I became a coffee girl – which had its challenges back when some tea shops stuck to ‘coffee only in the mornings, afternoon is the time for tea, dear.’ Even in the mornings, the coffee was often instant. Hmmmmm I’m showing my age here, time to move on.

The coffee that came with the cream tea was filter with a free top-up. I was fine with that. I would have preferred a cafetiere with a more powerful blend, and to be fair I could have ordered a cappuccino or a macchiato – but here we have another bee in what is becoming a rather overfull bonnet: if David gets a whole pot of tea, why should I make do with a single cup of coffee? So, the filter with the top-up is what I had.

David drinks tea quite happily and on this occasion ordered a Rooibos Cinnamon Plum. The first thing he did when it arrived was take the lid off the pot to check that it really had come with loose-leaf (Oh yes, David has plenty of bees too…)

I have to say, this was a tea not even I could object to. It was fragrant and light. Being loose-leaf it was served with a delightful brass tea-strainer; unfortunately, although this caught the flowers, it let the seeds through to float on the surface, which meant however fragrant and tasty, yours truly would take no more than the daintiest of sips. David loved it though, and finished the pot.

So that was our Warwick cream tea. Scrumptious is the word, a lovely experience and I’m always a sucker for sitting outside.

However, you may recall that the title of this blog post is ‘Cream Teas and Morris Dancing’

People can be quite cruel about Morris dancing, so let’s get that out of the way first. There is a saying that one should ‘try everything once – except Morris dancing and incest’ but in my view that’s harsh, Morris dancing is FUN, especially Border Morris. I can’t be bothered with hanky-waving Cotswold, if I’m honest 😊, it’s a bit too effete for my taste – although, David (aka Bean) did do some hanky wafting in his younger days.

Anyway, some years ago, I did a Morris workshop at Ely Folk Festival, run by Witchmen Morris – so imagine my delight when they pitched up outside the Thomas Oken Tea Rooms.

This has been a long post, when it comes to cream teas and Morris dancing I have much to say and could say more, but I will stop now leave you with this clip of Morris dancing with Daleks