I have been lapping up the coverage for Patrick Gale’s Man in an Orange Shirt and find the source material, the story of his parents’ marriage, deeply moving.

In brief, his mother discovered evidence that Patrick’s father was in love with another man but, because in those days homosexuality was illegal, she burned the letters and never spoke about what she had found.

All this set me thinking about writers and the extent to which, knowingly or unknowingly, they plunder the lives of their friends and family.

When I ‘came out’ as a writer and had my first novel published, people would say things like, ‘Ooooh I’d better be careful what I say or I might find myself in your next book.’ To which my glib answer was always that you may well be in my next book, but the chances are you won’t recognise yourself because whatever aspect of you I may have latched onto is only a starting point, a springboard for my imagination.

Of course, there is that tricky issue of ‘knowingly or unknowingly’. I know that in Arrogance of Women I described one character’s insights as either being spot-on or incandescently wrong – with nothing in between. That was based on a very good friend and I know she didn’t recognise herself until we discussed it.

That’s an example of ‘knowingly’ but what about ‘unknowingly’?

My first novel, A Rational Man, is a work of fiction. Of course it is, the word ‘novel’ gives that away, but yes, there are aspects of me in there. I used to be an antiques dealer and the female protagonist, Sophie, is an antiques dealer. The house where she lives is based on a house I lived in with my first husband. So far, so normal. It was when the paperback of A Rational Man came out that I discovered there was more to it…

At the time of the paperback publication I was deep into writing my second novel, The Arrogance of Women and, as my head was full of a completely different set of characters, before taking Rational Man out for a reading at a festival, I felt it prudent to skim-read, just to get myself back into that mindset.

I rang my dad to apologise. Now my dad was a lovely man. He was amused that I hadn’t realised what I’d done but his response was, ‘It’s all right, you’re a writer, it’s what writers do.’

All of which raises the question of writerly responsibility. I suspect not everyone’s father would be as sanguine as mine. On the other hand, had I realised what I was doing, would I (should I?) have written it otherwise?

I don’t know the answer to that but though my Dad is no longer around, I want to thank him for understanding me, and for loving me, and for knowing that I meant no harm. 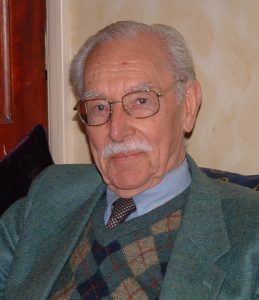