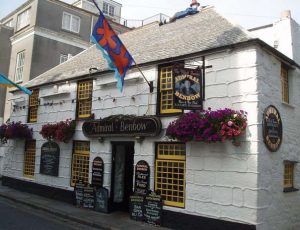 There’s always a lot of love, death and dire consequences buzzing round Penzance Folk Club (held once a fortnight at the Admiral Benbow on Chapel Street). I should know, since I’m one of the guilty parties. I have a bit of a reputation for songs of death and sex…

I became a regular here not long after moving to Cornwall. I have lapsed over the past year, but now I’m back!

I was introduced to folk music by my boyfriend (later my first husband) when I was 17. That first visit to the Benbow was like being transported back to those times. The club is friendly and incredibly welcoming. I was encouraged to sing and having got over my nerves, and with encouragement and input from my now-husband David, I found my voice.

All of which is great, I love to perform, but what is it about folk music that, for me, is so utterly engaging?

It’s All About The Stories…

When I lived in Cambridge I was convinced I couldn’t sing and so got involved with the oral storytelling scene. I remember performing with the wonderful John Row at Cambridge Folk Festival (not as exciting as it sounds, we were outside the main festival arena, next to the toilets and constantly interrupted by the sludge-gulper, not to mention the clog dancers on the adjacent stage) It taught me a lot about how to hold an audience against all odds.

However I’m telling you this because I remember John Row saying, ‘The reason we are storytellers, is that we can’t sing.’ I agreed at the time, but now I’ve found that I can sing and I realise that singing and telling are neither here nor there, they are just two different ways of telling a story.

Since we’re on the subject, I would say that all too often people assume storytelling is for children. Of course children love stories and you will see from the photo of (a much younger) me at the Cambridge Folk Festival that the majority of the audience was made up of children. That said, I always loved it when, after a performance, an adult audience member came up to me to say how wonderful it was to be reminded of the world of story. So, storytelling for adults – for a brief while I performed as one-of-three Scarlet Women…whoever would have thought The Gingerbread Man could be quite so raunchy?!

The perfect cross-over between these two occurred for me when, as part of Cambridge Storytellers, I took part in a performance called The Wild World of Faerie. My story was adapted from a folk song called Cruel Sister. Basically, the elder sister is promised in marriage but the groom falls in love with the younger sister. The elder pushes her sister over the cliff into the sea and she drowns. However, a minstrel finds her body and uses her bones to make a harp which he strings with strands of her hair. He takes the harp to the elder sister’s wedding, puts it on the hearth and the harp begins to play all by itself, telling the story of the younger sister’s murder, and naming her murderer.

Dark stuff, but a hell of a story which I expanded and developed and interspersed with snatches of the song.

These stories are dark, but then they are recording dark times. I sang Cruel Mother at the Benbow recently. There are many versions of this, some closer than others to the one I sing. It’s the story of a woman who had two children, both out of wedlock and by a man of lower social status (sometimes fathered by a farm boy, sometimes by her father’s clerk). She killed them both: presumably because she would have been punished by her family, ostracised by society. It is a deeply moving song as, at the end when she is confronted by her children’s ghosts, she understands the enormity of what she has done.

So, songs of love betrayed; songs of battles and seafaring adventures…the occasional song where the woman prevails. In The Devonshire Farmer’s Daughter she goes to market, makes a lot of money and on the way home is waylaid by a trooper. However she’s a clever and confident girl and she makes her escape on his horse with the money he has stolen from her and, presumably, from others. When she arrives home her father is so relieved to see her safe that he matches the money in the trooper’s saddlebag, all in all enough to set her up for life.

Of course, there are more modern pieces. I particularly like Jake Thackray’s Isobel. Isobel travels the country making love on national monuments but what Thackray does is personify the Royal Albert Hall which/who has not yet had the pleasure of her company. I first heard this when I was 18 and I was bewitched by the independence and confidence of the wonderful Isobel.

My Writing – Looking for Jonah

The ultimate crossover between these genres occurred when I wrote my novel Looking for Jonah (currently seeking an agent/almost finalist of Curtis Brown Write a Bestseller competition!) which hinges around a folk-rock band Black Rook Rising.

So there you have it…

While I ponder that, let me leave you with Jake