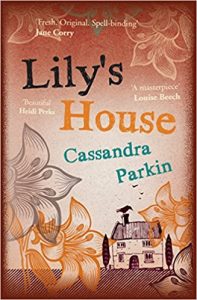 One of the joys of being on the organising team for the Penzance Litfest is the opportunity it gives me to delve into books that might otherwise have passed me by.

I have just finished Cassandra Parkin’s novel Lily’s House. I was reading it with a particular interest in its Cornish setting but in the end, it was not this that gripped me and held me to the end. One of the slightly peripheral revelations (no spoilers here!) moved me to tears and that doesn’t often happen these days as I am all too aware of the writerly-cogs spinning beneath the surface, but Cassandra Parkin helped me forget those cogs for a while.

Right from the start, as a reader, I had a stake in the outcome. The dialogue between Jen and her abuser takes place mostly by text and it is extraordinary how the seemingly inoccuous content contains such an air of threat. At least in the beginning the words themselves are just words and yet the context fills me, the reader, with dread.

If I have one criticism it is that the fey element regarding Lily herself and her dialogue with Jen, was almost written off at the end. Was it a paranormal intervention or was Jen using Lily as psychological support, a kind of sounding board? Cassandra seemed to be choosing the latter but speaking personally, I would have preferred it to have been left an open question.

That, however, is a minor point and entirely subjective. I finished the book thinking ‘yes, great…’ followed by ‘Oh, but now what?’ That is the kind of ending I like, the kind that leaves me thinking about where the characters’ lives might go from here, an ending that allows them to live on in my imagination.