At a recent Writers’ Cafe session on using old photographs as inspiration for writing, my search for material led me to some of my Dad’s photos from his time in North Africa during WWII; a few days later I came across a stand-alone extract from a novel I was working on a while back and which it’s high time I returned to. I should say that the actions described were not my Dad’s, the only time he saw action during the war was when his best friend got drunk and took a pot-shot at him! The one experience that does come from him is the mined hillside and the comment about Allied versus enemy boots.

Here we go then, with thanks to Abi Wyatt and to fate.... 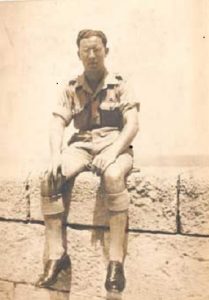 The wounded soldier huddles in the back of the lorry, sick with the heat and the pain and the heavy fumes of low-grade petrol. The emergency dressing on his leg is stained with dried blood and the muck of the desert. The lorry bounces over the pocked surface, lurching to one side to avoid a crater. The margins of the road are littered with burnt-out tanks and overturned jeeps and unidentifiable heaps of charred and buckled metal. He knows this road, every bump and crack, from El Agheila to Benghazi.

He remembers a fort perched on an outcrop, the mined hillside littered with human limbs. He’d felt nothing at the time, couldn’t afford to, nothing but a mild sense of curiosity. Yet the scene is etched in his memory and returns to him now in all its cruel detail…

A soldier learns to focus on such facts, it is a way of blocking out the stench and the blood and the sheer, fucking fear.

But his war is over now. North Africa is safe in Allied hands.

Shit, what a turn-up. Another pothole sends the pain in his leg screeching through his body. He thinks his head will burst with the agony of it. He’s a bit of a baby when it comes to pain, something Kitty teases him about.

He pulls himself upright and wedges his back against the tailboard of the lorry. He’s travelling in a convoy moving west to Cairo but can no longer see the vehicles behind because, out of nowhere, a storm has blown up. Whirling sand scours his face and forms a yellow fog that obscures everything.

Bloody typical. He’s spent months in the desert, racketing about in unarmoured lorries, exposed to air attack from both RAF and Luftwaffe; he’s gone deep behind enemy lines observing and recording, then back to Kufra and Siwa, to blue lakes and palm groves and tinned pineapple. So many dangers encountered and survived – and now he gets shot up by a desert-crazed Kiwi who thought he could end the war single-handed by killing his own side.

The dry bark of his laughter brings another spasm of pain and a reproachful look from the soldier on the stretcher opposite. He squeezes his eyes tight shut. It’s crazy, but he can sort of see the Kiwi’s point. It’s the sun, it addles the brain. One of these days he’ll go home, back to London and Kitty and his job – and how the hell will he ever fit in? Nothing will be the same, not after what he’s seen and done.

A navigator in a café in Cairo told him about Popski’s Army. It was early 1942 and Rommel had been driven back from Derna and over Christmas the Allies had entered Benghazi. The café was buzzing with a sense of victory. An Egyptian woman in a black, Western-style evening gown and bright gold dripping from her neck and ears, sang a series of haunting Arab love songs. Harry turned away, trying not to think of Kitty.

To block out the songs he focused on the gaggle of desert-blistered rowdies at the next table. They turned out to be members of the LRDG in Cairo for a rest and a refit. He later learnt that they were supposed to keep a low profile but they’d been drinking heavily and it was easy to get into conversation. The navigator took a liking to Harry. On discovering he was a mechanic, he flung a drunken arm round his shoulder and said, ‘So tell me, do you drive as well, Harry my son?’

‘Like a demon,’ said Harry, and the whole group roared approval.

It was a difficult unit to join if you weren’t a Rhodesian or New Zealander, but in the end he got in because they were actively looking for people, and because he really was a first-rate mechanic as well as a good driver; he also spoke Arabic tolerably well; then of course, the navigator put in a good word.

They were doing important work, going behind the lines, watching and recording enemy movements. Hiding up for hours on end in the full heat of the day could get tedious, not to mention bloody uncomfortable, but every so often they got the chance to shoot it up a bit.

The occasional burst of action does wonders to clear the air.

But when the shootings stop, that’s when the nightmares begin.

At the end of an exceedingly wearisome reconnaissance mission they spotted a convoy rash enough to venture out unescorted. They did not plan to return to this observation point so it could hardly compromise security if they revealed themselves. They exchanged glances. Not a word was spoken.

The Red Cross lorry grinds to a halt at a checkpoint. A shudder goes through him. He closes his eyes and tries not to think, to fill his mind with other things. Anything. The pain in his leg and the fresh blood that has begun to seep through the bandages; an afternoon spent in an olive grove, bartering tea for eggs with a grizzled Arab intent of testing his English and straining Harry’s Arabic.

What had happened to that Arab? Had war overtaken him? Was he even alive? And what about the women Harry had sensed hovering – rustling – just out of sight?

So many questions, all of them bringing him right back to where he began.

He feels it again, the unwelcome thrill, the glorious sense of release as, like a child skimming stones on the sea, he hurls grenade after grenade under the bellies of the lorries as they pass, then fires on the soldiers as they leap from the burning cabs and trailers.

Above all he remembers the noise, the rattle of the guns and the firework cackle of exploding ammunition stores – and the screams, like rabbits in a trap, the scrape of metal against metal, and his machine-gun swinging in an arc, light as a boy’s broom-handle gun. Bloody amazing – a credit to their training – that they didn’t shoot each other.

Then gradually the gun grows heavier, his movements slow. He stops firing. They have all stopped. On every side, the dead and the dying. Choking columns of black smoke rise like Indian signals from the burning vehicles. The blistering heat pushes him back from the carnage, towards the edge of the road.

Still of one mind, the patrol makes a run for the desert.

Their jeeps lie camouflaged amongst the dunes. They stumble and stagger down the final slope and hurl themselves into their shade. Harry plunges his head into the shelter of his arms, and waits for the roar of his blood to subside.

Minutes pass. His heart pounds against his ribs, against the compacted sand. He tastes the sand, inhales it, feels its gritty scratching beneath his eyelids.

At last all is quiet. He lifts his head. The others do likewise. He sees his own disbelief mirrored on their filthy, bearded faces.

‘Jesus,’ one of them whispers. ‘Amazing. All them German buggers dead on the road, but not a scratch on any of us.’ His voice becomes louder, more shrill. ‘Would you bloody believe it? The whole fucking patrol’s had it away scot-free.’

Harry’s not so sure. He waits a little longer, straining to detect the hum of the planes that must surely be drawn to investigate the inferno on the road.

He hears nothing. A faint breeze, carrying the taint of burning petrol, lifts a flap of the camouflage net. The thorn scrub caught in its web creaks.

Then the breeze dies and the net drops back, and there is nothing to be heard, only the silence of the desert.

A voice from far away and far into the future.