Summer is drawing to a close here in the far west of Cornwall and, with it, the cream tea season… 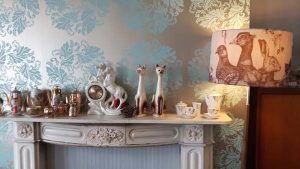 Two weeks ago it was a blazing day in Falmouth when David and I visited Dolly’s Tearoom.

What’s really exciting about this place is that it’s a tea room by day and a gin palace by night – truly my sort of venue and we plan a return visit for some gin-tasting.

I will get to the cream tea, but first:

We were greeted by two dogs, a spaniel pup (I think she’s a spaniel, but I’m a cat person so I could be wrong) called Pearl, and a golden Labrador, the pearly queen herself, Hebe.

Of course, I had to ask whether there was a story behind Hebe’s necklace but was told that it ‘just sort of happened…’ which I find an intriguing statement. A dog in a chunky pearl necklace doesn’t strike me as the sort of thing that just happens, but there you go … if anyone out there knows the ‘real’ story or a different story, do please scroll down to the comments and let me know.

A Touch of Faded Elegance 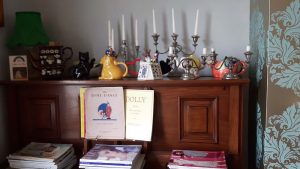 Faded elegance is something I’m very fond of – I’m not a great fan of places that have been tarted to the gills, everything new and shiny, straight out of the furnishing catalogue. No, I prefer something a little more haphazard: surprising and daring combinations of artefacts; paintwork that’s seen better days – and no, not ‘shabby chic’ which is often as contrived as the furnishing catalogue look. Yes, I know I’m generalising and we can all come up with exceptions, and I’m probably sounding judgemental, but for me the point of these blogs is to give you my honest opinion about the venue and about the menu, no dancing on eggshells here…

So faded elegance, mismatched china – in my antiques dealing days I would have called these ‘harlequin’ sets. The décor is an astonishing assemblage of flea market/charity shop finds (well, I’m guessing this from the appearance, if they came from the proprietor’s great aunty, I apologise) and the effect is a complete delight.

We pitched up at around 1.00 pm on Saturday and to be honest, I was surprised we got a table. Not only did we get a lovely spot by the window but shortly afterwards the only other occupied table was vacated and we had the whole room to ourselves.

People of Falmouth and holiday makers alike, just look at what you’re missing…

Ok, time to talk about the menu.

I’ve been having conversations with various friends about Cornish ‘cakey tea’ traditions One element of cakey tea is Thunder & Lightening. I’ve not tried this yet but it clearly deserves a mention in Healthy Eating in Cornwall (if such a publication exists) featuring as it does both clotted cream and golden syrup – golden syrup being far more decadent than jam because the latter includes fruit, so at least it offers a nod to your five-a-day.

The menu at Dolly’s did indeed offer Thunder & Lightening and I was within a whisker of ordering when my eye strayed to the next item on the list: Boozy Cream Tea – scone, clotted cream and raspberry gin jam.

But first, let’s talk about David’s order. David, as I’ve said before, prefers savoury to sweet. The Thomas Oken in Warwick offered him a luscious cheese scone. Dolly’s, alas, had no such thing on the menu so it was a Yankee Croque for David, without the gherkins. I was tempted to ask him to let them bring the gherkins anyway and give them to me, but I decided they probably wouldn’t go with the gin jam…

David’s judgement on his Croque was that it was ‘perfectly fine’. To me, that sounds like damning with faint praise but, as David said when he read my first draft, he is autistic and so it means exactly what it says, no more, no less i.e. ‘just what it says on the tin.’

(As an aside, David and I have written a series of blog articles, Life in a Mixed Marriage, exploring our very different ways of looking at the world.) 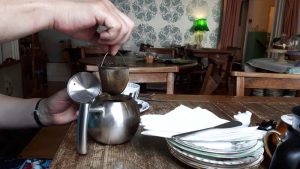 Now back to Dolly’s. David’s choice of tea was a great success. He ordered a pot of gunpowder and full marks to Dolly’s on that one. No teabags here but proper, messy, loose tealeaves. David was in tea-heaven.

For my part, I had a pot of coffee, a fruit scone and some gin jam.

The gin jam was fantastic. I could have sat with an entire pot and a teaspoon and not bothered with the scone. Sad to say, the scone was a disappointment. Scone singular – which is fine when the scone is the size of the Thomas Oken one, but this single small scone looked niggardly (the photo above flatters it) and did little to assuage my hunger. Come on, Dolly’s, you are charging extra for the gin jam so two scones, of this size, would look generous and raise this customer’s spirit…

On the plus side, the scone was warm but unfortunately had that mix of sogginess and crumbliness that suggested it had been warmed in a microwave. I have an intense dislike of things warmed in microwaves. Granted it wasn’t dry, but the whole issue of jam-or-cream-first became moot because its crumbliness meant it was more a case of mushing the scone and toppings together and trying to get them to my mouth without making too much of a mess.

Sorry, Dolly’s – it was a lovely experience and we shall be back (gin jam, gin-tasting….) but I intend these blogs to be honest and true, not just a simple plug for the tearoom. If I give praise, my readers know it’s real because I will tell them if I find something a little ‘off’.

So, dear readers, I hope you’ve enjoyed this. If you have a moment, do please take time to look at the photos – if you’ve been to Dolly’s and have had an experience worth reporting, please go to the comments. Oh, and if you have ANY cream tea recommendations, I’d like to hear those too (and yes, Rosemergy is on my list!).